Posted on May 1, 2018 by Michael Linenberger

Almost exactly a year ago, Microsoft changed the menus at the top of the Windows Desktop Outlook 2016 Inbox. By “menus” I mean the sorting and filtering controls right above the list of mail, but below the Ribbon menus.

What they’d had for most of 2016 through May of 2017 was this sequence of controls/buttons that you see at the top of the image below, specifically: All; Unread; By Date; and Newest.

In May of 2017 they replaced that with simply the folder name (Inbox), and an “All” menu, as shown here: 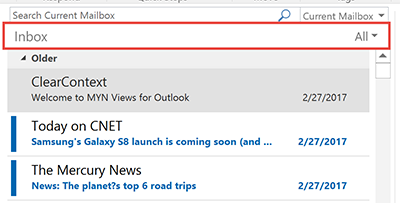 Or if your window was wider it looked like this, with Search box to right:

That new All menu on the right collected all the same menus the previous controls had, but squished them all together into one menu item. That was a lot of stuff to fit in one menu, so you needed to use submenus to get to things. I received a number of complaints from users who didn’t like the new All menu, bemoaning having to go two levels down in menus to get to the controls they previously got to in one step.

Back to the Future (menu-wise)

Well, I noticed today that in the most recent monthly Outlook 2016 build update (Version 1804, Build 9226.2114), Microsoft has reverted back to almost the exact same design as a year ago. Here’s a recent screenshot of the new look:

You can see the only difference from a year ago is the sorting direction arrow on the far right—it now has no label since the arrow is now the control. But otherwise we are back to the old design. And the folder name Inbox is gone, as it was a year ago.

I can’t say I really care one way or the other, but probably prefer the new resumed old look. It gives me quicker access to sorting controls. It removes submenus, which are often a pain to use. And I don’t need an Inbox label. However these flip-flopping changes make documenting Outlook in my books and videos (my self-assigned job) a bit of a moving target. Let’s hope Microsoft sticks with one design for a while!